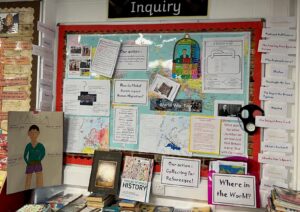 Transitus 1’s latest inquiry delved into the impact that global events have on human migration. The class investigated many significant events including Pompeii, World War 2, and more recent conflicts, in Syria and Afghanistan, studying the cause and effect and push and pull factors in relation to migration.

The pupils read a wide range of texts, investigated data on migration, and considered and discussed these world events from a variety of perspectives. Together, the pupils compared and contrasted refugees and evacuees, mapped the journeys of refugees across the world, and investigated timelines. The class was so moved by their learning that they became involved in the school’s campaign to support the Glasgow-based charity, Refuweegee. The charity’s representative, Clare Bury, visited T1 and was blown away by the depth of their knowledge and their insightful questions and discussions.

The final element of the topic was for each pupil to write a story from the point of view of a refugee. The outcomes are insightful and moving, demonstrating an obvious depth of knowledge on the topic, as well as the level of empathy and compassion our pupils have developed throughout the project. Well done T1 on a great inquiry project!