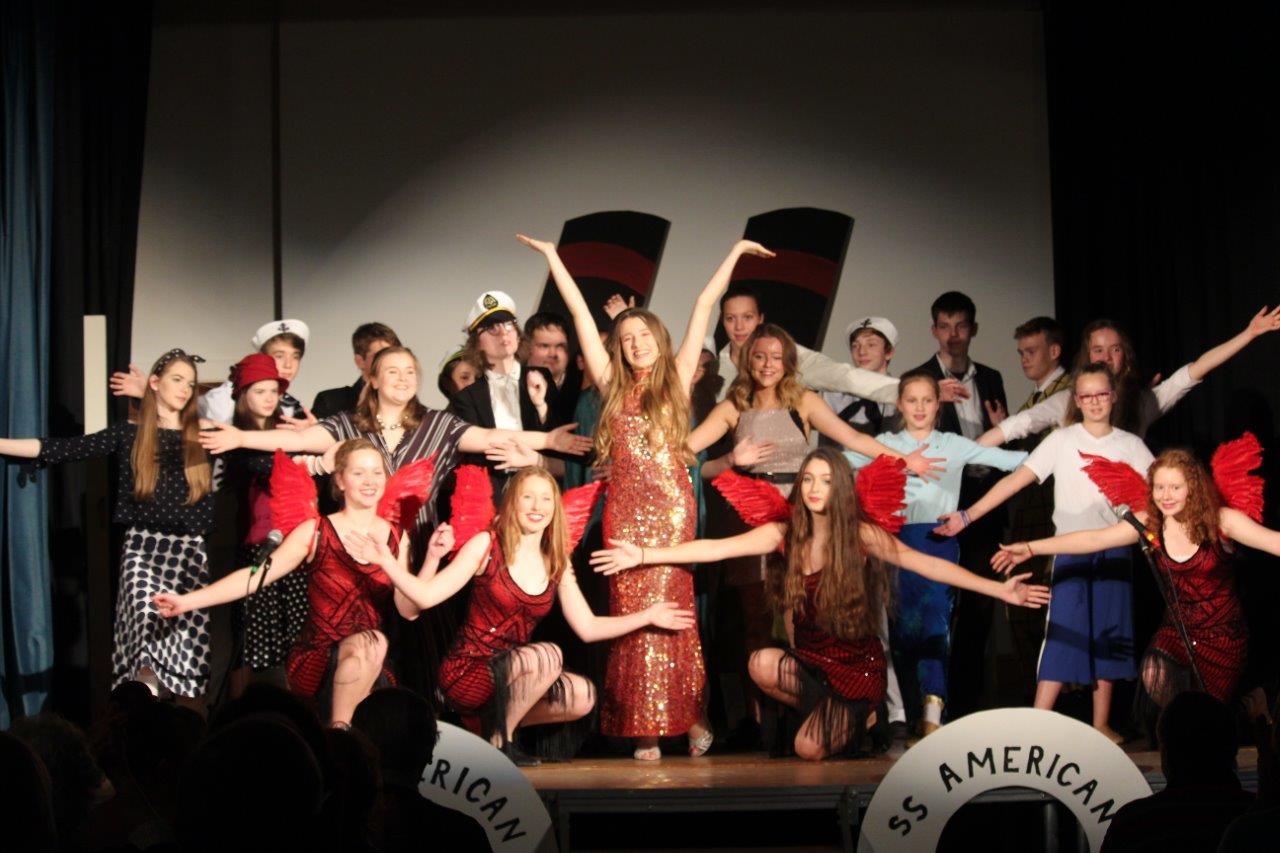 Lomond School’s senior pupils have once again been hard at work over recent months preparing their annual production which was performed on Thursday, Friday and Saturday of last week.

This year, it was all aboard the SS American for an extravaganza of music, mayhem and mischief as Cole Porter’s ‘Anything Goes’ set sail. Directed by Marianne McKillop (also performing on double bass), the ensemble cast of multi talented singers, actors, dancers, musicians brought the glitz and glam of the 1930s to life over three nights.

The plot unfolds the story of undercover gangsters, singers, an innocent heiress, her over-protective mother, evangelists, gambling businessmen and a bungling English lord as they cruise across the Atlantic from New York to London, with a captain and crew who turn a blind eye to their riotous capers. As the song says, anything goes!

Sophie Reid made a dazzling Reno, belting out legendary numbers such as ‘You’re the Top’, ‘Blow, Gabriel’ (with Dylan Krezdorn on sax) and of course, the rousing ‘Anything Goes’. Rosie Green (Hope) and Matthew Lambert (Billy) gave a gorgeous rendition of ‘Delovely’ and Molly Keating (Erma) gave a show-stopping ‘Buddy Beware’.

Comic highlights were provided by Duncan Robinson as the lovable but deranged Moonface Martin, sidekick of public enemy number 1, Snake Eyes Johnson; Jemma Doherty as the fretting Mrs Harcourt and Peter Crowson, sporting a bright yellow suit of plus fours as Lord Evelyn Oakleigh. Matthew Lambert’s ruse as Plum Blossom’s father brought the show to a close as lovers were reunited, new love declared and fortunes restored to all, even our own wolf of Wall Street Mr Whitney (Mason Ralston).

As musical director, Barrie McKillop brought his expertise as a longtime musical director, performer and conductor. Our thanks also to guest musician Alex Nicholson and choreographer Danielle Pearson for giving their time. Sets and costumes were constructed by Billy Kerr, Alice Mucklow and Daisy Harris. Rosin Brogan ensured all costumes were ship-shape every night. Lighting was managed by Ross Gildea and the stage was efficiently managed by Izzy Stilwell, Cara Malcolm, Nadiyah Hassan, Kaitlin Ellis, Emma Dunn and Grace Laverty and with help from Dr Cotter.

Principal Johanna Urquhart said:
‘Every year I am amazed at the standard of the school production and this year is no exception, it really was a great show. Our pupils have access to drama lessons from J1 right through the school to Advanced Higher so there is plenty of opportunity for them to experience performing and discover hidden talents! This production saw our young people really pull out all the stops. I would like to say a big thank you to all the staff, pupils and parents who helped make this production possible, and of course to Mr and Mrs McKillop. Congratulations to everyone involved’.

Ahead of the main performances, the pupils were delighted to welcome a group from ‘Grey Matters’ in Helensburgh who enjoyed and afternoon of music and song whilst also providing a live audience for the all-important final dress rehearsal.

Grey Matters is a forum and social group for the over 65’s living in Helensburgh and Lomond which aims to give older people a voice in their community and to tackle loneliness and social isolation. Meetings every Saturday in the Guide Hall on John Street see a range of speakers from MSP’s, MP’s and local elected members to locals with an interesting story to tell.

Mrs Alison Gildea, a Lomond School parent involved in the running of the Grey Matters group commented:
‘Being able to attend wonderful productions like we saw at Lomond School this week add something extra to what we are able to offer. Allowing older people in our community the opportunities to get out and socialise and enjoy activities they may not otherwise be able to is key and the benefit to them is immeasurable’.