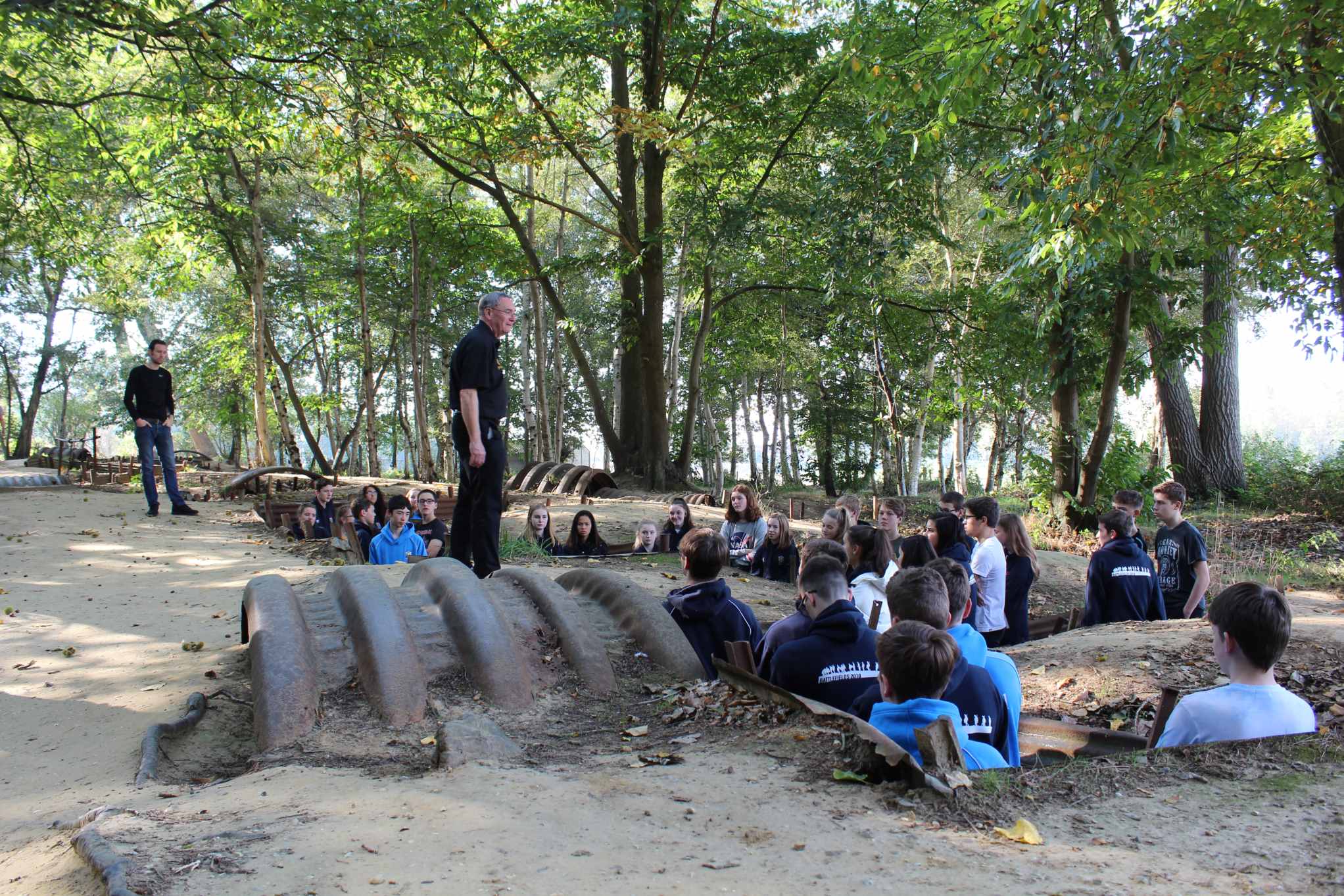 During the half term break, Lomond School’s humanities departments led a very moving trip to Belgium and France to visit the First World War Battlefields.

One of the key aims of the trip was to help the S3 and S4 pupils to try to understand what life was like for the soldiers there and, thus, the itinerary was carried out in character as the 2nd Lomond Pals (made up of 39 Privates and 4 Officers). Pupils were encouraged to reflect on what life was like for the soldiers and carried out research into their own family history before departing, so as to honor any family members who had served during WW1.

The trip started with a visit to Sanctuary Wood where the trenches were never filled in and the debris of the battlefield still surrounds the site. They then visited Hooge Crater Museum where pupils learned about the development of weapons during the Great War, the Pool of Peace at Messines and the new football memorial which commemorates the Christmas Truce of 1914.

Reveille for Day 2 on the Somme was 6.30 am. Being woken by the Pipes and drums at this time of the morning was a challenging experience for some of these raw recruits! The focus of Day 2 was to establish the sheer scale of loss in this war. The group paid their respects at the Beaumont-Hamel Newfoundland Memorial site. Then at Thiepval, the memorial to the missing of the Somme, crosses were placed on behalf of the school, under the names of 4 Larchfield boys whose bodies were never recovered from the battlefield. The day was rounded off with a visit to the Canadian National Vimy Memorial; a truly monumental tribute to the Canadians who gave their lives.

The final day of the trip saw the group, accompanied by Mr Forrest on the bagpipes, walk for two miles along the ridge from Passchendaele to Tyne Cot cemetery; the largest for Commonwealth forces in the world, for any war. Again, respects were paid to a Larchfield boy whose name appears on the wall for the missing in Lomond School’s Larchfield Hall. This was followed by a visit to the German cemetery close by at Langemark where a short commemoration was held for all those from both sides who gave their lives and a German pupil laid a cross on the alter.

The trip was rounded off by the group’s own act of remembrance at Hooge Crater Cemetery where a wreath was laid on behalf of the school by torch light. All pupils took part in the ceremony accompanied by Mr Forrest on the bagpipes and Rachel M on the Fife, playing Highland Cathedral. A very moving and fitting end to the tour.

Principal, Johanna Urquhart said:
“I know that those on the trip were very moved by the experience and it has definitely had an impact on them that will last with them throughout their lives. The staff involved received such positive comments from both pupils and parents on their return.”

The History department and wider school will continue to commemorate the 100th Anniversary of WW1 with several projects and events over the coming month, in line with the school’s values of Courage, Compassion and Reflection.