A former pupil at Lomond School has been awarded a prestigious accolade for her time working with refugees in Greece, helping a widowed refugee from Kenya coordinate a charity launched from her kitchen.

19-year-old Kristina Von Kaehne from Lochgoilhead is meant to be in Greece right now, volunteering for a charity providing support for refugees and teaching them English and German. Due to travel restrictions from Covid19, she is instead spending her summer off university working as an auxiliary nurse in Cowal Community Hospital in Dunoon.

Kristina is one of 19 Scottish young people who have recently been awarded a Diana Award, an accolade set up in memory of the Princess of Wales to celebrate young people who have demonstrated their ability to inspire and mobilise new generations to serve their communities and create long lasting change on a global scale.

Nominated by two of her former teachers at Lomond School, Kristina was awarded for her time spent in Greece working in refugee camps, assisting in medical centres, teaching primary pupils, and hosting English and German language classes for children and adults. 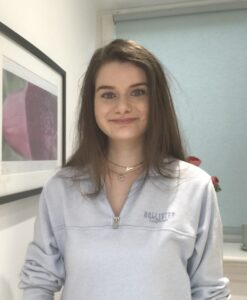 From her first visit to a refugee camp in Thessalonika, Greece, at the age of 15, Kristina was determined to do more. Since then, she has returned six times, has helped a widowed refugee from Kenya coordinate a charity launched from her kitchen, set up a donation scheme at Lomond School and has began her studies at Glasgow University to become a human rights and immigration and asylum lawyer.

Kristina said: “The first time my dad took us to Greece with him we were based in a camp in Thessalonika and I was shocked at the situation refugee families were facing. Since then, whenever my dad goes, I always join him. For me it’s better than going on a summer holiday.

“The third time I went out we were based in a camp just outside of Athens. In the afternoons when things were a bit quieter, I would play with the children in the camp. I formed a close bond with a two-year-old boy called Taregh, and at the same time my dad, who speaks the Afghan language of Dari, struck up a relationship with his family. We became really close.

“When I returned for a gap year after school, Taregh’s mum had cancer and they had moved to Athens for treatment. I spent the next year working in a charity called Love and Serve Without Boundaries (LSWB) while babysitting for Taregh’s dad, Amir, so he could visit his wife.”

Amir and his family have since moved to Germany where his wife is continuing cancer treatment. Kristina stays in touch with the family and plans to visit them when it is safe to do so.

At just 16, Kristina was teaching primary school classes before she got involved with LSWB at the age of 17. Set up by widowed Kenyan refugee, Maria Odhiambo, in her kitchen, the charity was funded by money Maria had earned as a nanny. The community-based centre provides support to refugees and low-income/homeless Greeks. This support includes a variety of language and skill classes, food distribution, and handouts of daily essentials.

Kristina said: “I started teaching English and German classes through the charity, helping refugees of all ages learn new languages. I was teaching a class where the youngest was a six-year-old girl and the eldest was a 55-year-old man. It was difficult but everyone would help each other out.

“It was great to spend the year there and see real progression in their language skills before I left.”

After her role within the charity and growing close to founder Maria’s kids, Kristina became Godmother to Maria’s grandson and keeps in close contact with them.

Back in Scotland while still at Lomond School, Kristina’s teachers convinced her to host an assembly on the refugee crisis in a bid to set up a donation scheme.

She said: “I was so shy and hated public speaking. I wanted to be a lawyer and help refugees, but I didn’t think I’d be able to pursue my dream. Mrs Chisholm and Mrs Guy spent hours, and I mean hours, of time convincing me I could speak to the entire school and I finally managed to do it. It sounds cheesy but they allowed me to step out my comfort zone and go after my dream of being a lawyer. I never would have been able to do it without them.

“My teachers then put me forward for the Diana Award and I couldn’t believe it when they told me. I’m so grateful and hope it inspires others to get involved in causes such as this – after one visit to a camp it would be difficult not to go back and help.

“There are so many ways you can get support and funding along the way, and the people you meet change your life. The hardest part will be not wanting to come home.”

Kristina is currently working to raise money for LSWB to help refugees through Covid19. You can donate here.