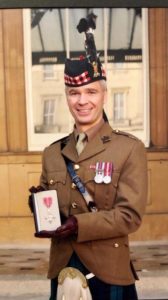 Many congratulations to former School Captain (Class of 1999), Gordon Muir’.

Gordon was recently awarded the MBE in the Military Division of the Order for his Services during his Company Command Tour including deployment in Ukraine.

Gordon is continuing his service as a Major in the 4th Battalion, The Royal Regiment of Scotland.